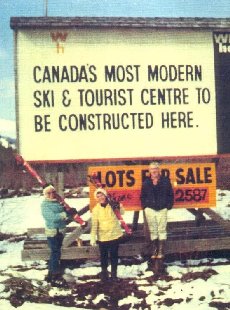 In February 1966, Whistler opened itself to the world with one six-person gondola, The Red Chairlift and two T-bars under the guidance of the Garibaldi Lift Co.

Previously known as London Mountain, the area received province-wide attention after a failed bid to host the 1968 Winter Olympics. Seeing potential in the area, Franz Wilhelmsen and some like-minded investors raised $800,000 in capital launched the Garibaldi Lift Company in 1962. Under the company’s guidance, the resort launched in 1966, alongside a newly paved two lane highway from Vancouver to Whistler.

It didn't take long for skiers to realize Whistler Mountain offered some of the best ski terrain in North America. Soon "A" frame cabins, hostels, a pub, a gas station and basic ski town amenities sprouted up in what became Whistler's first neighbourhood. When construction on the new Whistler Village commenced in 1980, the originally Whistler community became known as Creekside.

The complex offers a full-service grocery store, beer and wine store, a variety of retail shops, great dining options and entertainment alternatives. Ski essentials, from Whistler Blackcomb equipment rentals to beginner ski lessons at Whistler Kids, are easily found at the slope-side shopping area. Dining options are endless in Whistler Creekside with fine dining establishments and cool and casual dining found within a short distance of each other. 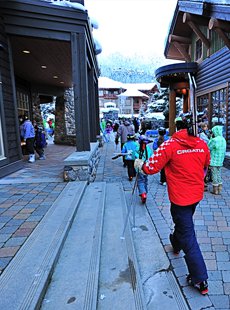 Whistler Creekside offers a laid back alternative to the often crowded Whistler Village. Creekside nightlife means sharing a pint beside the roaring fireplace at Dusty's Bar & Grill, a late night dinner at Creekbread or soak in the hot tub or sauna at a Lodging Ovations property.

Days are spent riding on the hill, browsing the shops or exploring Alta Lake! Families and couples seeking a little 'rest and relaxation' may find the pace of Creekside Village more their liking.