From Family Après in Olympic Plaza to the Whistler Holiday Experience, there are tons of fun family events and activities happening during the holiday season in Whistler.

However, if you’re looking for a more adult way to ring in the New Year, Whistler has you covered! Home to lots of great bars, clubs, pubs, and restaurants, Whistler is a party-goers paradise on New Year’s Eve. Spend your night eating and drinking amazing wine, or join the party crew for a classic NYE Whistler bar hop.

Whistler is such a fan of New Year’s celebrations that they’re offering free public transit in town from 6 pm to 4 am.

Come out and celebrate the end of another great year in Whistler with a toast to 2019! Take a look at some of the fun New Year’s Eve parties coming up:

Presented By CÎROC Vodka, you can celebrate the coming of the New Year in style at the GLC New Year's Eve. Noted as ‘one of Whistler’s best New Year’s Eve parties’, a ticket to the evening includes a welcome drink, a glass of bubbly to toast at midnight, and front row seats to the fireworks at midnight.

Start your 2019 off with a night to remember at four iconic Whistler venues. Join the New Year’s Eve Edition of the Whistler Bar Hop for a-rockin' good night out in the Village.

You can experience some of the best parties in town guided by Whistler locals! Plus, your ticket to the Bar Hop will get you five drinks, pizza, express entry, snowmobile tours, merchandise giveaways, and professional party hosts.

Hailed as being the ‘Whistler’s wildest New Year's Eve event’, Uncorked at Maxx Fish is a celebration you won’t forget. Kick your party into overdrive with world-class musical entertainment provided by Whistler's own Fidel Ca$hflow & Dre Morel.

Enjoy a feat of modern Italian-inspired specialities, made by Executive Chef James Walt and his brigade of cooks, at this memorable New Year's Eve dinner. Join the party at Il Caminetto for a night of fanfare and festivities. There are two different seating times and with the later seating having a choice between a four-course prix fixe menu or a four-course Gala prix fixe menu.

Celebrate the New Year by treating your taste buds to a special evening at Aura Restaurant featuring an 11-course meal with wine pairing. Tickets to NYE Wine Tasting at Aura
are available for $299. 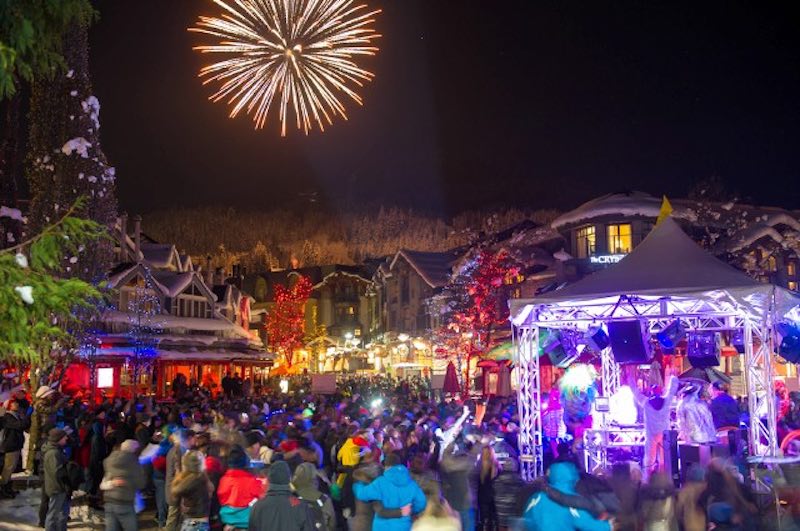 New Year’s Eve wouldn’t be complete without some fireworks! At 11:30 pm, you can catch a special edition of the Fire & Ice Show, capped off with a grand finale fireworks show at midnight.

Head over to Skier’s Plaza, located at the base of Whistler Mountain, for the best view of both the Fire & Ice Show and the fireworks display after!

There are tons of ways to ring in the New Year while you’re in Whistler. Don’t miss a minute of the action by checking out New Year’s Events in Whistler on Facebook.